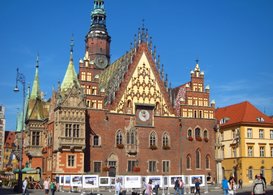 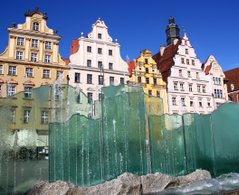 the capital of the Lower Silesia, is one of the oldest and most beautiful cities in Poland.

Its history is very rich and it dates back to the X century when the King of Bohemia, Vratislav built a castle there. In the last decade of the same century it was conquered by the first King of Poland, Mieszko I and this way Wroclaw became a base of the Piast dynasty.

In 1241 the city was destroyed during the invasion of the Mongols. After the renovation in XIII century the Magdeburg rights were applied in the city. In the following century Wroclaw became a part of the Kingdom of Bohemia and later was incorporated to the monarchy of the Habsburgs.

In 1741 the mayor part of Silesia became a province of Prussia. In the beginning of the XIX century in the city of Wroclaw the uprising of the Prussians took place that led to the independence war with the troops of Napoleon.

In the beginning of the XIX century very fast economical and industrial development attracted thousands of people to the city reaching the total of 500 000 and converting Wroclaw to one of the biggest and most important cities in Germany.

The strong position of Wroclaw during the Second World War converted it in a fortress resulting in the very serious destruction of the city. After the war, thanks to the agreements in Potsdam, Wroclaw with a mayor part of Silesia became again a part of Poland while the German inhabitants had to migrate back to Germany. In a repopulation process, thousands of inhabitants from Central Poland and those that were made to leave Lemberg (today Ukraine) settled down in Wroclaw.

At present Wroclaw is an important political, economical, scientific and cultural centre in Poland. With more than 600 000 inhabitants it is the fourth largest city of Poland. Located close to the German and Czech borders, at the foot of the Sudety Mountains, with the Oder river passing through it, it can be admired for its beauty and its unique character.

Every year a number of different musicals and theatrical festivals are organized in Wroclaw. The most popular are: festival “Vratislavia Cantans”, festival “Jazz on the Oder”, Wroclaw Non Stop, The Meeting of One-Actor Theatre and Small Theatrical Forms, International Dialogue Theatre Festival. Wroclaw is also a place where avant-garde theatrical project are presented like the Pantomima of Henryk Tomaszewski or the Laboratorium Theatre of Jerzy Grotowski.

With more than 20 higher education schools, the University and the Polytechnic Institute, Wroclaw is also a very important scientific centre.