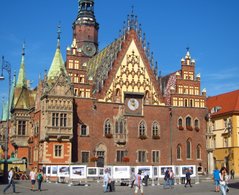 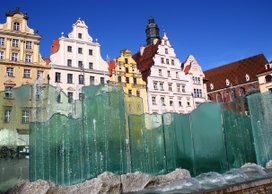 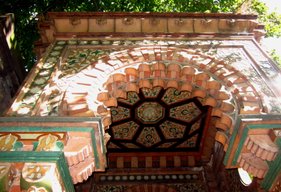 In general there are very few Jewish cemeteries in Poland that were not destroyed during the Second World War. There are 3 of them in the city of Wroclaw. All of them are from the XIX century: one in Lotnicza Street, another one in Slezna Street (the oldest and the best maintained of the 3, it also has a Funerary Art Museum on site) and the last one in Gwarna Street.

The cemetery in the Slezna Street was founded in 1856 and some 1 200 tombs are still preserved until today. Some of the tombs are of the people that originally came from the places far away from Wroclaw like Boston, Bonn, Hannover or Tanger and died while staying in the city. In 1943 the cemetery was closed. After the Second World War for some time it was neglected, but in 1975 it was declared a monument of a historic value and taken care of. It is open to public seven days a week from 10:00 till 18:00.

The tombs of the well known people that were buried in the Jewish cemetery in Wroclaw:

*Julius Schottländer (1835 - 1911) was one of the most important people in the history of Breslau. In the late XIX century and the early XX century he was the richest inhabitant of Breslau, the owner of numerous properties in a few districts of the city (Wysoka, Suchy Dwór, Kowale, Borek, Klecina, Oltaszyn, Biestrzyków), cement factories, brick factories and sugar factories. He was also the owner of the mineral water in Karlovy Vary (Karlsbad-Czech Republic). From 1908 he settled down in his palace in Partynice (Hartlieb) - that was unfortunately destroyed during the Second World War. Julius Schottländer was also the founder of the Po³udniowy Park and in 1877 founder of the pavilion for cultural events contributing to the development of the south part of the city. In 1896 he founded a residential house in Wiœniowa Street for older Jewish inhabitants of the city.

*Ferdinand Julius Cohn (1828-1898) born and died in Breslau. He was born in a Jewish family and thanks to the fortune of his father was able to study and become a scientist despite his disability (hearing impairment).When he was 14 years old he was admitted to the University of Breslau and 5 years later he already received el doctorate degree at the University of Berlin. In Berlin, for the first time he was introduced into the basic knowledge of micro organisms. From 1849 he worked as a physiology and botanic professor at the University of Breslau. In 1866 he founded the first Institute of Physiology of Plants. He also analyzed the bacteriological origin of the infectious diseases of the plants and animals. In 1882 his famous book: “The Plant” was published which brought him international fame as a founder of the bacteriology. Ferdinand Julius Cohn was the first honorary Jewish of the city of Breslau.

*Heinrich Graetz (1817-1891): author of the “The History of the Jews”. He received his doctorate title at the University of Jena. From 1845 he was the Principal of the Orthodox Jewish School in Breslau and later taught history at the Theological Seminary in Breslau. In 1869 the University of Breslau awarded him an honorary professor and in 1888 he became an honorary member of the Royal Academy of Science in Spain.

*Leopold Auerbach (1828-1897): Biology and History professor at the University of Breslau.

*Max Born (Breslau, 1882- Göttingen, 1970): German mathematician and scientist He won the Nobel Prize in Physics in 1954 shared with another German physic Walter Bothe. Max Born considerably contributed to the development of the quantum mechanics and he was the first one that used that term for the first time.

*Marcus Brann (1849-1920): History professor in the Seminary of Jewish Theology at the University of Breslau. He was an author of the first concise history of the Jews from the Bible times until the XIX century.

*Ferdinand Lassale (1825-1864), lawyer and German socialist politician. He was born in a Jewish family of traders, studied in Breslau and Berlin. While staying in Paris, in 1845 he established contact with the French socialist movement. For his participation in the German revolution in 1848 and while he was imprisoned, he established friendship with Karl Marx. From 1860 he collaborated with the workers movement and the trade unions and he was one of the founders of the General German Workers’ Association in 1863, later converted in the Social Democratic Workers’ Party of Germany that later became the Social Democratic Party of Germany.

*Heinrich Toeplitz (1822-1891), trader, founder of the Commercial Bank, sponsor and a friend of Stanislaw Moniuszko, a famous Polish composer.

The other cemetery is located in the Lotnicza Street, on the outskirts of Wroclaw on the area of 11 hectars. It is the fifth biggest Jewish cemetery in Poland. It was established in 1902 when the cemetery in the Slezna Street turned out to be too small. Thanks to its historical and architectonical value in 1983 it was registered in the list of the historic monuments. There are approximately 8 000 tombs in this cemetery. One of the most interesting tombs is the one of the Jewish militaries (432) of the German Army that died during the First World War. Over the years many of the tombs were covered with ivy making it difficult to appreciate their value. However, it is worthwhile paying a visit to this cemetery to walk through the paths contemplating the tranquillity and the mistery. The cemetery is open to public every Sunday from 9:00 till 13:00. The entrance is free.