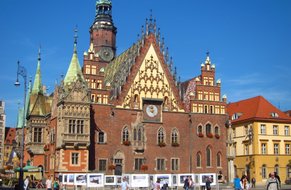 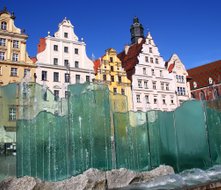 Royal Palace of Wroclaw, also called Spatgen Palace or Palace of the Kings of Prussia. Its oldest part dates back to 1719 and in 1750 it was purchased by the King of Prussia, Frederick II, the Great and from that moment it was named the Royal Palace. Initially the palace represented the baroque style with some classicistic elements. In this palace, on 10th of March 1813, his son, Frederick William III Hohenzollern, whose army was defeated by Napoleon Bonaparte, created a military decoration called the Iron Cross. In the following years, a number of extensions was added to the palace (the Neo Renaissance style) and after the First World War the palace was converted to a museum. During the Second World War a big part of the palace was burned down and it was demolished in the 50’s. In the most recent years the main building was a base of the Ethnographical Museum and the Archeological Museum and at present it is converted in the City Museum.

The City Armoury of Wroclaw displays interesting collections of military objects and its earliest building dates back to 1459.

The Museum of Architecture is the only one of the kind in Poland, situated in the old gothic monastery presents its precious collection of stained glass (from the XII to the XX century). In addition numerous architectonical details are displayed as well as maps, drawings and photographs.

The National Museum of Wroclaw was opened in 1948. It displays one of the most interesting and important collections of the medieval art in Europe. The exhibition also includes items of Polish art dating back to the XVII-XIX century (that arrived from Lvov and Kiev after the Second World War) and more than 20 000 pieces of Polish contemporary art. The museum also runs its own publishing house printing guides, brochures and reference books. Frequently there are lectures, films, shows and meetings with authors organized on the premises.

Entrance tickets can be purchased in advance

Panorama of Raclawice, located in the Slowacki Park, is a rotunda that houses a giant panoramic paining (120x15 metres) painted by 2 famous Polish artists Jan Styka and Wojciech Kossak. It depicts a battle of Raclawice in 1794 in which the Polish army lead by Tadeusz Kosciuszko defeated the Russian army. The work dates back to 1893 and it took 9 months to complete. Initially until the Second World War it was displayed in Lvov and when the war broke out it was secured in storage. In 1980 the plan was made to have it displayed to the public again in a specially designed rotunda and the official opening took place in 1985 and from that moment Panorama Raclawicka is one of the most visited tourist attractions in Wroclaw. The museum frequently organises lectures, concerts or presentations of movies about art.

The Wroclaw University Museum was officially opened in 1992 and presents the history of the University of Wroclaw from the year 1702 until now. Aula Leopoldina, Oratorium Marianum and the Mathematical Tower should not be missed.

The Nature Museum was opened in 1814 and since then has been displaying exhibitions of botany and zoology from the most distant parts of the world.

The Ethnography Museum was open in 1948 as a branch of the National Museum. It displays old cultural items like textiles, clothing, ceramic etc. coming from the region of Lower Silesia.