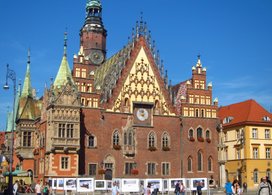 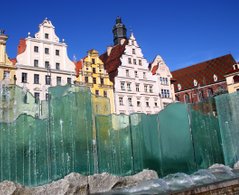 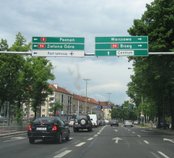 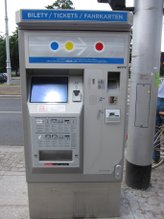 Distance to the city centre: 10 km

Public transport: the city centre/the main Railway station/ the main bus station can be reached by taking a bus 406 (the bus stop is located in front of the exit from the

airport), on weekdays it runs every 20-30 minutes and weekends every 40 minutes.

Parkinig facilities are available for 900 cars (A,B,C, VIP). Discounts of 40% are offered for reservations made online at least 7 days before arrival date. For bookings made

Crossing the border in Germany

Crossing the border in Czech Republic

Crossing the border in Slovakia

Crossing the border in Ucraine

Crossing the border in White Russia

Crossing the border in Lithuania

Crossing the border in Russia

Some tips for car drivers

*It is prohibited to use a mobile telephone while driving

*All the vehicles have to be equipped with a fire extinguisher, a triangle and a first aid kit

*Attention: The legal alcohol limit in blood is only 0,02% and it is an equivalent of only one glass of beer

*A bus joining the traffic has priority

*Trams have always priority unless the signs indicate otherwise

*Radar checks are very frequent, especially on the outskirts of the city (when leaving or entering the city)

The Polish National Railways (OKO) operate the EuroCity trains between Poland and a number of European cities like Prague, Budapest, Berlin and Vienna. Connections between Wroclaw, Warszawa (Warsaw), Kraków (Cracow), Katowice, Poznan and Gdansk are frequent and of a good quality. Special train passes: InterRail and Eurodomino can be used on the trains in Poland. More information can be found on the internet page: www.interrailnet.com

*Smoking is strictly prohibited on site of the buildings at the train and bus stations.

*The trains marked OSOBOWY are the ones that make lots of stops, are slow and the cheapest. POSPIESZNY is a fast train, it is marked in red on the train schedules and it only stops at main stations. EKSPRESOWY is a fast train similar to a Eurocity or an Intercity trains.

*The duration of the journey is almost the same independently of the type of the train (Intercity-IC or Express-Ex). The main difference is in the type of the carriages, compartments and the price (trains marked Express are cheaper than the IC). Attention: For those trains an advance booking is required.

*Journey from Warsaw to Wroclaw on an Intercity train takes about 4 hours, from Cracow to Wroclaw less than 3 hours and from Poznañ to Wroclaw about 2 hours.

*Journey from Berlin to Wroclaw on an Intercity train takes about 5 hours, from Dresden to Wroclaw about 4,5 hours.

*Train tickets can be purchased at the train stations as well as at the major travel agencies (e.g. Orbis).

*There is a possibility of buying a ticket on the train paying a supplement although it is obligatory to inform the ticket inspector before getting on the train.

*Children younger than 4 years travel free on the train while children between 4 and 10 years have a discount of 50%.

*Attention: discounts for students are only offered to the Polish nationals upon the presentation of a student’s ID.

*The Railway station is within 20 minutes walking distance from the old centre of Wroclaw and from the Town Square. To reach the old centre by public transport, take a tram

*There is a taxi stand, bus station and a secure parking in front of the station. The bus tickets can be purchased at the newsagent’s outside the station.

*The complete train schedule can be found on the internet page of PKP:

Buses operating on the outskirts of Wroclaw have the numbers from 604 to 623. There is no night time tram service but there are night buses marked in black on the schedule with numbers from 240 to 259 that circulate once an hour.

The bus and tram tickets are exactly the same and they can be purchased at the newsagents’ and in the automatic dispensers. At night and on Public holidays and Sundays tickets can be purchased directly from the bus drivers. In order to purchase the tickets on the bus small change is required as the drivers don’t have change.

The tickets are invalid until they are validated in the machines aboard. Once the ticket is validated, on its reverse side the date when the ticket was validated appears. All the tickets are single and one trip can be made using it, so every time by getting on the tram or a bus a NEW ticket needs to be validated.

There are also special travel cards available that are valid 24 hours, 3 or 7 days and can be used on trams and buses. When travelling with a large suitcase or bag a separate single ticket needs to be validated. Children younger than 3 years old don’t require tickets.

Attention: Look after your belongings when using public transport especially during peak times and also when getting on or off the trains.

There are numerous taxi stands in the city, but it is much cheaper to call a taxi by phone (dialling one of the numbers listed below). Taxis come without any additional cost

to the address indicated. It is important to use only the taxis that are officially registered and in the same time avoiding the ones that don’t have names of the company on the side door or on top.

Name of the taxi company/tel.number:

There are 4 types of tariff:

Sundays and all Public Holidays.